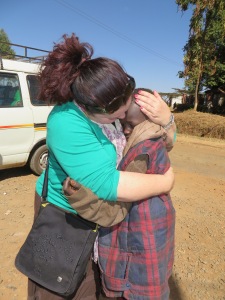 I have been back in Kenya for several whirlwind weeks. Our Upendo Boys are doing so amazingly well. What an incredible transformation of seven young lives in just a few short months. The Upendo Home team in Kenya, led by Pastor Odari, are doing a remarkable job ensuring our young ones are receiving the best of physical, emotional and spiritual care. It shows.

There’s been so much happening that I want to share which is challenging with an always spotty internet signal. I am determined to post, however, as my heart is heavy and I feel it’s time to share about something I’ve been holding onto since last year.

If you’ve kept close track on our work here, then you’ll recall that we rescued a total of eight boys, not seven. The truth is, we lost one. My beloved Joseph. He decided to leave us just before Christmas, breaking my heart in a million pieces. So much so that I have not wanted to talk about it.

As I returned to Kenya this trip, I was hopeful I’d be able to see him again as we continued Pastor Odari’s weekly feeding program, which Love Without Borders (my non-profit) is supporting. My goal in seeing Joseph was not to scold or tell him of my disappointment, though I am disappointed. No. My goal was to affirm my continued love for him and gently get him to help me understand why he would leave all the benefits of Upendo to return to street life. Just before I left last October, he and I talked about his strong desire to return to school, and I had promised him he would be doing so in January.

He had no idea I was back in Kenya, nor that I would be at the location where we serve meals to street orphans. I had no way to know if I would even see him. But then, I did. He came shuffling down the street, toward the place where we feed the street kids each week. Though I wasn’t sure before that moment how I would respond, my mama instincts kicked in and I immediately went to him. Then, he saw me. He was clearly high and reeked of the unmistakable smell of the glue he’s addicted to huffing. But at that moment, all of those things fell away as I gathered him up into my arms – holding him oh so tight and close – and my silent tears began to fall. I just held him, telling him “I love you, Joseph, I love you.” This photo captures that very moment. Right after this picture was taken, I lifted his face to look into mine and realized that he was weeping too. I have other photos that show his face, but I’m not sharing them publicly to protect his privacy. Trust me, you would be shocked speechless. I’ll be honest. He looked like walking death to me.

Oh, my breaking heart. My beloved, talented, bright Joseph — the very one who’s wicked smart and wants to be a professor, is an incredible artist and dancer – has succumbed to what he’s known most of his life. The streets. His own way. Glue. Despair. Regardless of living in the freedom of his choice, his face told such a dramatic story of loss and confusion over his decisions. Confusion he shared with me as even he said he does not understand his choice.

Then came the moment for my heart and my head to debate. Of course, my heart immediately wanted to take him back, try again to restore this dear one so lost. But in my head, I know that he’s not ready to fully yield and humble himself as is required to live with the other boys who are doing so well. I know it is not fair to drop a bomb like Joseph back into the middle of all of the good progress that has been made at Upendo Home. Though I know the boys well enough to know they would welcome him back, despite how mean he was to them and how much he hurt them, physically and as their friend.

Trust me when I say that we did not agree to let Joseph return to the streets without much counsel, assurance of our love, prayer, pleading and reasoning with him over many weeks of time. We did not let him go easily. It hurt us all deeply to lose him. But our boys get to choose. Joseph chose to go, and go he went.

Making the decision to let him go, to allow him to live out his choice is incredibly hard. There’s one thing that gives me comfort and assurance above the mind-numbing and heart wrenching circumstances. Joseph knows and belongs to the Lord, who promises that He remains faithful to those who know his voice, even when they stray.

Joseph is my precious little sheep too. I will forever be mindful of him, looking for him, encouraging him and loving him. That we lost him to the streets just affirms for me that more needs to be done for hundreds of older boys who may choose to remain in this way of life as the only one they’ve known. There are hundreds. But for all of their street wisdom, these boys are still children. Children who will grow into men one day and still need a way to live beyond their dismal beginnings. That has given me a lot to think about as we plan future ministry to the street orphans.

My boy has made his choice to walk a very hard, dangerous road. I worry about him and my heart breaks to think of him living the way he’s chosen to live. But I know, in the end, God has my little sheep in his sights and one day, either here or in Heaven, Joseph and all that he has lost will be redeemed. And on that day, I will celebrate in the way Jesus describes in Luke 15:6:

Then he calls his friends and neighbors together and says, ‘Rejoice with me; I have found my lost sheep.”

I love you Joseph, I love you.

Friends, we need to intervene earlier in lives like Joseph’s to help orphaned children avoid the pitfalls and negative influence of street-life. My Love Without Borders team is working hard to stand in the gap. You can help make a tremendous difference by supporting our work with a one-time or ongoing donation here. Thanks ever so much for caring without borders.